A Day Trip To The South of Corfu.

Not much had been happening since we last posted. Chelsea are 7 points in the lead of the Premier League following a 4 – 0 victory over Tottenham Hotspur on Saturday, 8th March. That put us in good spirits!

The weather was expected to be good on Sunday, 9th March and so we decided that we would take a trip to the south of the island and have lunch either in Boukari or Petriti. It was also going to be the first long drive that Tricia had attempted since she had developed sciatica. She still had pain but it had reduced considerably. Having said that, she did take a cushion with her!

The weather turned out okay and so having first walked the dogs, we set off around 10.30am. There was the obligatory stop for coffee and pies at Emeral. Our reasoning was that it provided a short break for Tricia … and also meant that I wouldn’t be complaining that I was hungry!

We stopped off at Benitses both on our way and on our way home to take some photos. We continued our journey and then stopped off at Boukari where a fishing boat was coming into the harbour. We have a thing about working harbours as opposed to harbours which contain little but pleasure boats. Even here, fishing on a commercial basis, is hard work. This was brought home when we discovered that the fisherman had only caught about five kilos of fish! It wouldn’t even cover the cost of his diesel!

We noticed that there were some of the fish tavernas open in Boukari which was good news. We intended carrying on to Petriti to take some photos and then returning to Boukari for lunch either at Kalami Taverna or Spiros Karidis Taverna. In the end, things changed!

The road from Boukari to Petriti was in need of some repair but easily negotiable. However anyone on two wheels would have done well to avoid the puddles as they frequently hid potholes. I think it fair to say that we have seen it much worse during previous winters.

Petriti has not changed! The harbour was full of fishing boats and there were people fishing from the harbour wall. Again, there were tavernas open. For us, this is good news. It seems that every year more tavernas decide to try opening earlier. We suspect that this is still only weekend opening but it is a start. We hope that those that make the effort are rewarded.

Tricia and I took a slow walk along the beach. At the opposite end of the beach from the harbour is a sailing yacht that is floundering at the mercy of the sea. We had heard about this recently. Whether it is true or not, we don’t know but we have been told that the owner was taken off having suffered a heart attack. He apparently subsequently passed away and there appears to be no family to remove the yacht. It is a very poignant sight.

We ambled back along the beach and decided to renew our acquaintance with Stamatis the proprietor of Stamatis’ Fish Taverna. We only intended having an ouzo to whet our appetites before heading back to Boukari for lunch. Stamatis was very welcoming and the ouzos came up with a meze of octopus, tomatoes, cucumber and olives. Very nice! Whilst relaxing with our meze, we realised that being Lent, there was likely to be a limited menu everywhere. After some debate, we decided that we would stay where we were, have lunch and then go and take some more photos! That’s exactly what we did!

Lunch was simple. Sardines, kalamari, horta and chips were the order of the day and very nice it was too. The portions were so good that we struggled to finish it. If you have seen me eat, you will realise just how big the portions were! The sardines were exceptional. We were somewhat surprised to see them as they are not strictly Lenten. What am I saying? They are not Lenten as they have a backbone! The bill was amazingly low by our standards although we did have to remind Stamatis what we had eaten and drunk! Then to round things off, he flatly refused a tip! 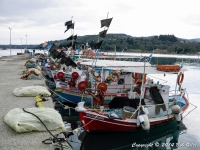 Tricia and I took ourselves off to the harbour to take more photos. In the summer, the fishing fleet will be joined by sailing flotillas and other pleasure craft but on this day it was purely working vessels. It is very photogenic, not to mention a colourful sight.

By the time we arrived back home it was nearly 6pm. The dogs were pleased to see us and to be honest we were shattered! hopefully this jaunt will have given Tricia the confidence to make the occasional excursion as although she was hurting a little by the time we returned, she appears to have suffered no lasting effects. As they say, “What doesn’t kill you, makes you stronger!”

We hope you enjoyed this account of our day trip south in winter as much as we enjoyed the real thing. Enjoy the photos!

This site uses Akismet to reduce spam. Learn how your comment data is processed.